Shopping Cart
Your Cart is Empty
Quantity:
Subtotal
Taxes
Shipping
Total
There was an error with PayPalClick here to try again

Thank you for your business!You should be receiving an order confirmation from Paypal shortly.Exit Shopping Cart

Here is the 18 week old bundle of joy that is now all updated on shots 21 pounds, and howler at all hours of the day

Almost 7 years ago we picked up K'mala (aka Kawasaki) from Nikerbee's. He is the handsome boy of Summer and Boomerang. Instantly he brought my wife and I joy along with his playfulness when we brought him home to Erie, PA. He would accompany us frequently to Presque isle, where he would swim in the lake, pull me on my roller blades for miles, as well as learn bikejoring, watching fireworks with amazement and evening jamming to the concerts at 8 great Tuesday's.

Then came the news that we had to move back home to Allentown, PA, where we took jobs in Healthcare. K'mala continued to love being around people and we enjoyed taking him to larger events and festival where he became enthralled by miniature horses. He also enjoyed going to outdoor concerts (especially hard rock for some reason).

He eventually became a sort of local celebrity gracing the front page of the local newspaper at an Iron Pigs game, with the title of "Fan's Best Friend" in 2014. Truly a perfect description of our K'mala. Around this time he achieved his CGC certificate and began sharing his lovable demeanor with the local nursing home residents. making frequent visits to brighten up the day of others as he has done for our family. He has gone on bus rides with the residents, met 1 on 1 with many people as well, even winning over the hearts of people who had been scared of dogs before with his calm demeanor.

I can't thank you enough for letting this amazing dog come into our lives. Not only has he made our lives better but he has touched the lives of countless people in his short 7 years. 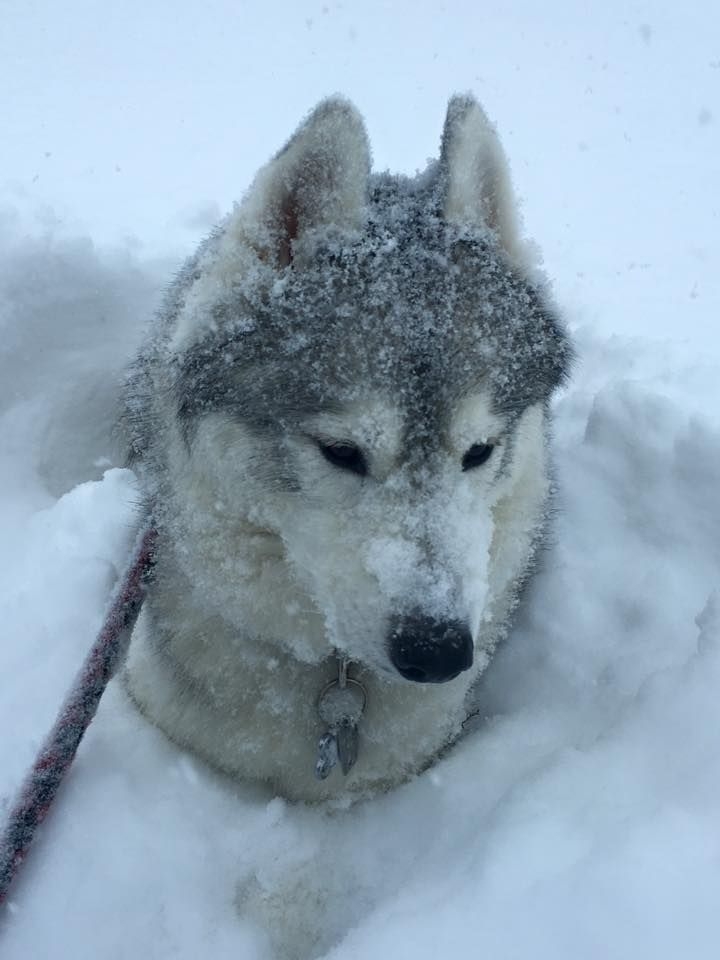 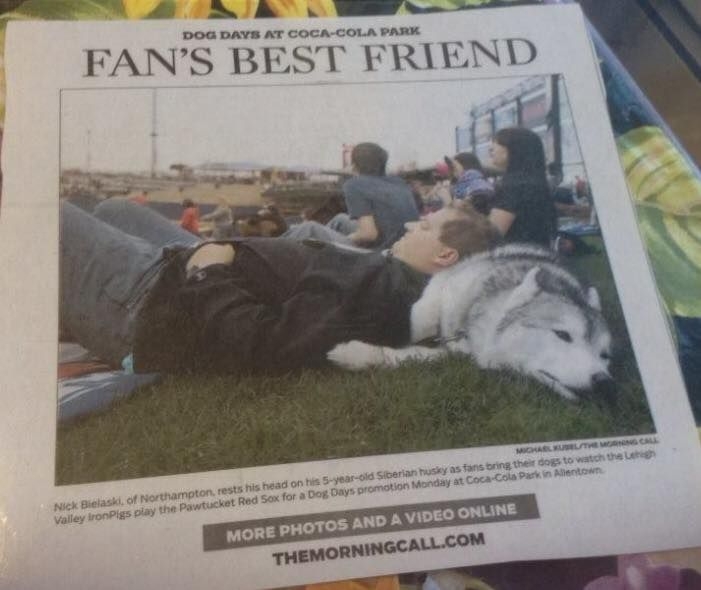 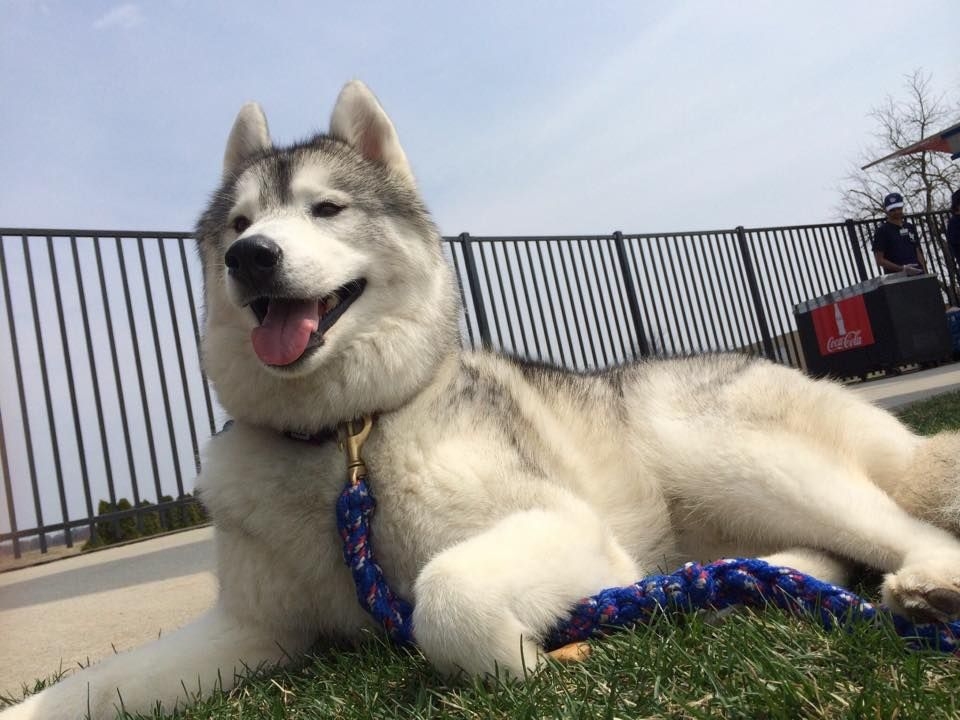 Liz and I came to visit you and the two puppies that were still available with the intentions of choosing a female with a black and white coat, but immediately connected with (who is now) Mya Blue. We could already tell she was going to be a troublemaker as she pulled her male cousin (who was about three weeks older and ten pounds heavier) around the kitchen floor by his tail, but was also very interested in playing with us and cuddling in our laps. We had bought a new house in McCandless (north of Pittsburgh) with a big, fenced in backyard two months before picking up Mya and she immediately took to her new home with little-to-no potty training required.

Mya absolutely loves going on long walks, playing chase in the backyard with countless sticks, and learned all of the primary commands (sit, down, shake, side, this way/come, etc.) within the first two weeks of bringing her home and at less than three months old! She has also quickly become a local celebrity in the North Hills of Pittsburgh as the veterinarian and vet-techs request for her to come in just to play and she is now on a first name basis with every walker/jogger that finds themselves at North Park and the lake there - a nice amenity for her to have less than five minutes from our house. She has even started to walk into the river/lake to cool off and get a drink without any hesitation, which will be great when her first full summer comes around here in 2016. Like many huskies, she finds herself getting into trouble while digging up our backyard, wanting to chase the deer and birds that frequent our neighborhood, and has used her smarts to figure out her kibble tastes better with a little cheese, salmon, apple, or meat sprinkled in it (otherwise refusing to eat at all). That being said, we love spoiling her with those treats, bones, and peanut butter just for being cute :)

She is almost nine months old now and already a speed demon so we look forward to exploring canicross, bikejoring and testing out new hiking trails once the weather clears up some. I've also been in contact with the West Penn Mushers group on Facebook and am hoping to get Mya to some of their events to meet other huskies and learn more about fun recreational activities for her to enjoy in...and maybe learn a few husky-raising tips while I'm at it!

We cannot thank you enough for our gorgeous pup (who is well aware of how beautiful she is based on the sheer number of compliments she receives) and love being able to treat her like a princess, which is only fitting given the tiara-like marking on her forehead! Here are a number of pictures from our initial visit with her and her siblings and through her first few months as a puppy that saw her getting to meet her aunt Roxy Blue (a bulldog), go on car rides, chew on my pants, jump on couches, and continuing to be super cute. Note how she loves to awkwardly lay on the floor with her head/neck completely turned around...weird pup.

I am attaching photos of my furbabies that you allowed us to adopt!! You are a blessing! I love both of them soooooo much!!

Best babies ever (dont tell my son I said that!) Here are pictures of Avue, baby to now, she will be 7 I am pretty sure in October, I cant remember her moms name but her dads name was Demon, right?She is a spoiled little baby, dainty and cuddly!! Loves hanging by the pool in the sun.....

And here are pictures of Ila, which we call Ila Monster, opposite of Avue, fuzzy as all heck, talks like crazy and is a cuddler.......she is almost as big as Avue, she will be 9 months old next week and her mom is Icy and Turbo I am pretty sure..... 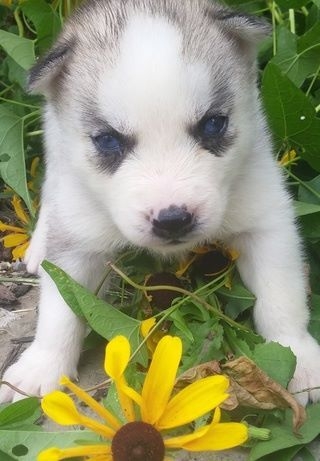 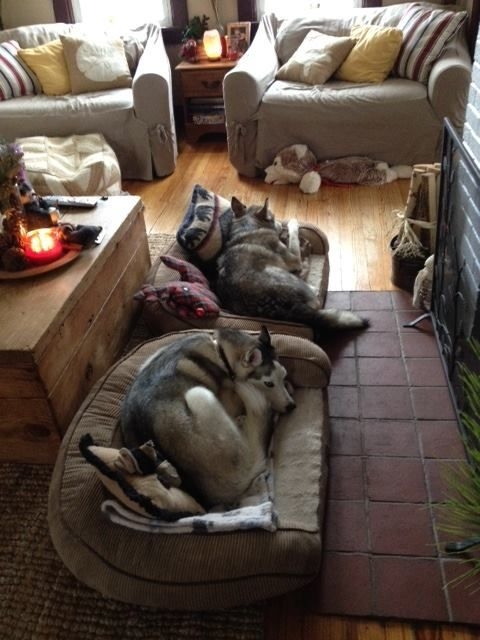 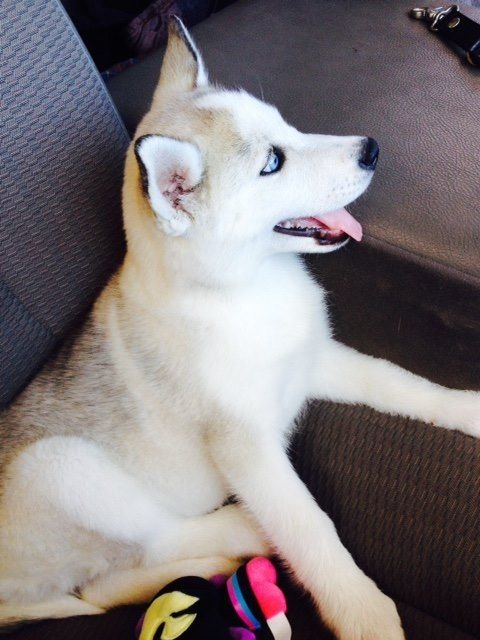 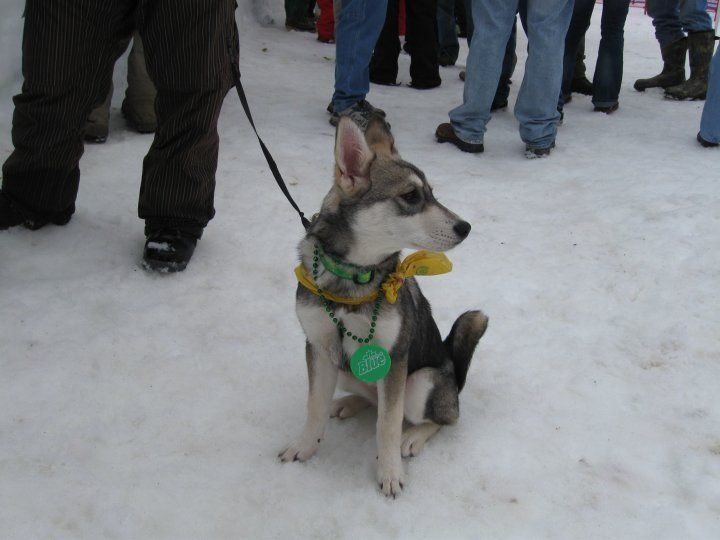 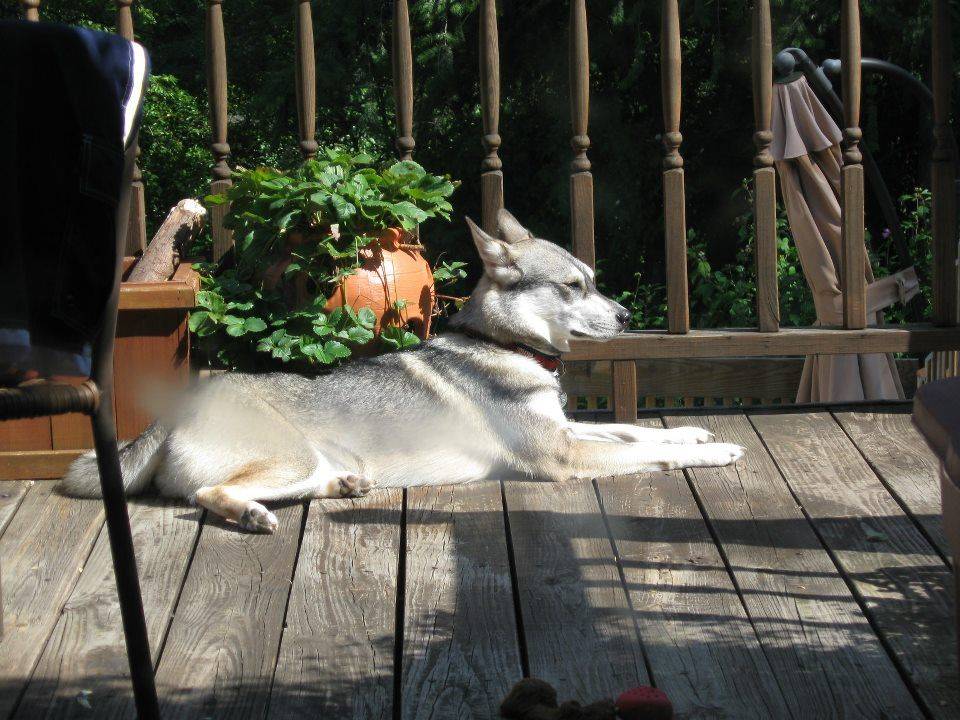 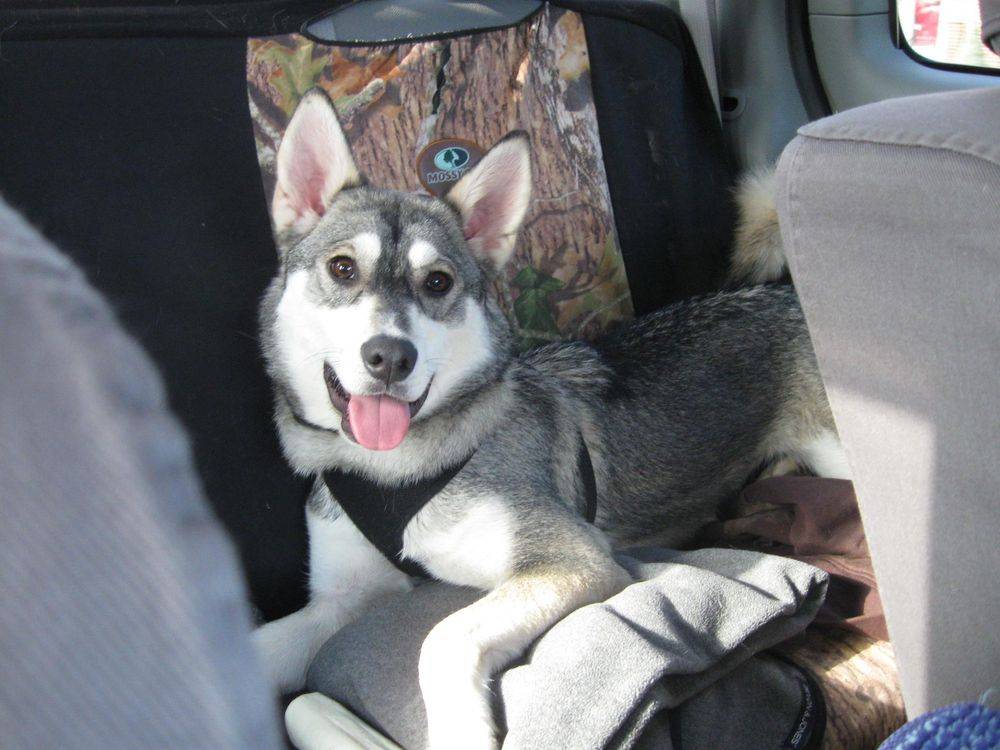 Here is our little guy Neeko! We got him in March of 2014, he was originally named Blizzard! We love this guy soo much! He has brought so much joy into our lives and definitely prepared us for having children in the future! He loves to go on long runs with his Mom, especially in the winter time! He is the friendliest husky and is very popular with other dogs when we spend our weekends at the dog park! He is a picky eater when it comes to dog food but LOVES to destroy all his toys and pillows! We constantly get compliments on how well behaved and HANDSOME our Neeko is!! Thanks again for giving us such a great companion! He is our world! 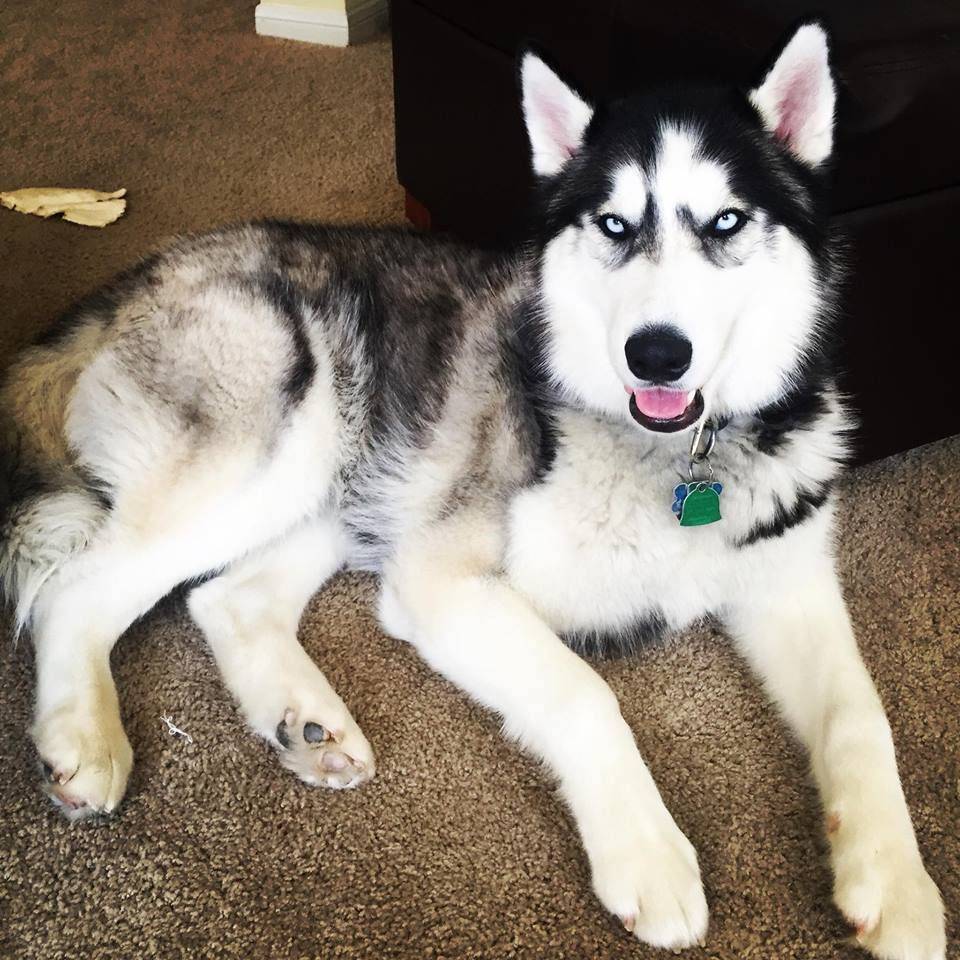 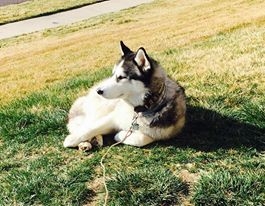 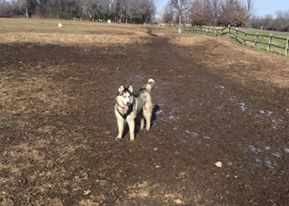 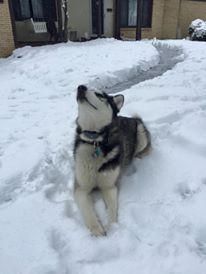 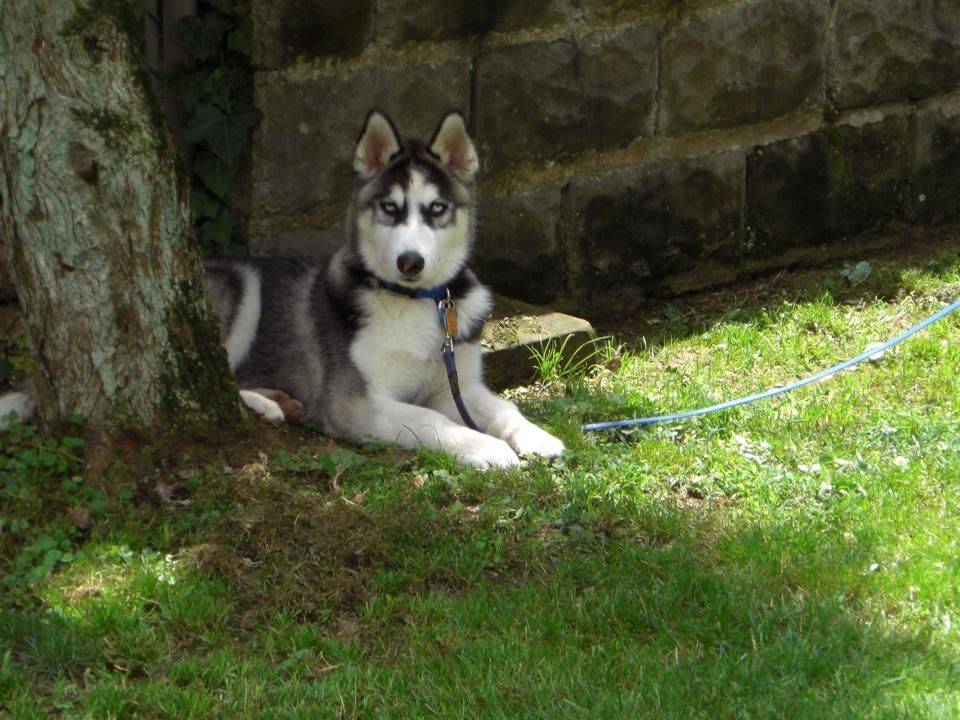 I haven't sent you any pictures for a while. Here is a picture of shadow and the white one we called bear. They are both doing great and are a big part of our family. Bear takes after his mom even no bear is a male and shadow is a female.SHADOW IS STILL THE BOSS>>>>>>>>>>> Thank you for two great dogs. If you ever need reference for any of your pups you can always give them our email.They are great dogs with a great temperament.

Here are some pictures of the puppy we adopted from you and we named him Pittsburgh. He adapted very well to our other huskey Nakita and they both love to dig up our yard together. They sleep together on the backporch because after 2 days in his crate Pittsburgh would not do it without howling all night long so they have been together since then. Pittsburgh took right to big dog food after a week of puppy food and he has been doing fine ever since. They play in the backyard very well and Nakita shows him the ropes and the best spots to dig. Our yard is currently muddy due to rain and snow so the pictures are of them right after they came in and as you can see Pittsburgh took most of the mud and Nakita is pretty clean for being in the mud. We enjoy having him and thank you so much for letting us adopt him. The children and him get along very well.

I just wanted to give you an update. I took the new puppy (Ruby) for her vet check up last night. When I walked in with her, the vet techs had their cameras ready! Her picture is on my receipts from them now! Dr. Krewatch examined her and said I got a good one! He gave me a puppy pack and a bag of Pro Plan puppy food.

Everyone that has met Ruby so far thinks she is absolutely gorgeous!!!! They’ve all commented on how beautiful and friendly she is. Her personality is really coming out! Tonight she started barking at me, so I barked back at her – she proceeded to bark back again then ran as fast as her legs would take her in little circles. She also loves to prance around and carry her toys. We’re really having a lot of fun with her and haven’t had any complaints! Here are few pictures I’ve taken of her including the one we took at your place with my cell phone on Wednesday.

Blizzard won the Lawrence County Canine Idol Contest!! His picture will be on the letter sent to all dog owner's alerting them that their dog license needs renewed!